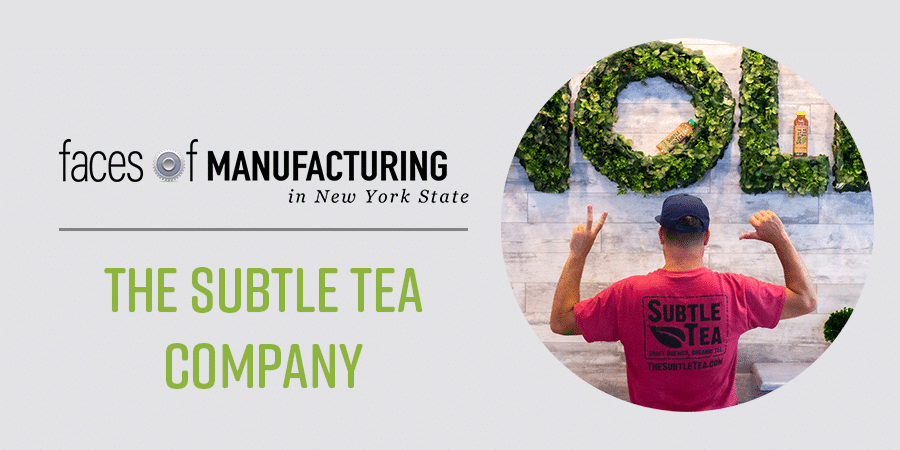 The Subtle Tea Company is Long Island’s only brewer and bottler of tea. Over the past six years, it has been working to keep up with demand for its innovative organic and craft-brewed creation. “We saw a need for a niche product, and it’s been growing,” says Founder Kyle Chandler.

The idea for Subtle Tea struck Chandler one hot afternoon when he was volunteering at a beer festival.

“I was thirsty, and there was nothing nonalcoholic to just refresh myself,” he says. “It was this legitimate lightbulb moment:  Why isn’t there a craft-brewed iced tea?”

The son of a craftsman–his father John (now Head Brewer at Subtle Tea) was a cabinetmaker–Chandler grew up wanting to own a factory. He jokes that he was “a nerdy kid” who took extra classes instead of lunch.  His high school job was at an engineering firm, and his internship had him de-icing airplanes.

He earned a mechanical engineering degree at the University of Rhode Island, then began a 15-year career with Northrup Grumman. During that time, he would earn a Master’s in Systems Engineering from the Stevens Institute.

“I did a lot of really cool stuff in that world,” he says. “I landed on an aircraft carrier. I did radar integration.”

One day at Bed, Bath & Beyond–where he was using all of his 20% off coupons for tea pots, timers and other needed items–he ran into curious friends.

Now he is engineering recipes for tea, making spreadsheets on steep times and sugar amounts.

He took space in the Calverton Incubator at Stony Brook University. Space was limited, so the 1,400 bottles he brewed each week would be loaded into his truck and taken home.  Every Thursday, he invited friends to a “labeling party”.

“It’s amazing what you can do with pizza and beer,” he says.

The first batches were sold to shop and brewery owners he knew through the beer festival circuit.

He was still working at Grumman, meaning Subtle Tea was relegated to nights and weekends. But two years in, he knew something had to give.

“I left Grumman and it was incredible the traction that happened after that,” he says. “You have to commit to it.  If you have a plan B, it’s not going to work.  Grumman was a crutch for me for a long time. Now I was able to devote 100% of my efforts and time to Subtle Tea and it just doubled and doubled.”

With orders too large for his friends to handle, he bought labeling equipment and put it in a shipping container in his back yard.  In another container was a heat tunnel used to apply shrink wrap to cases.

Tea that wasn’t bottled went into kegs and wine-style boxes–an idea which won an InnovateLI Innovator of the Year award in 2017–enabling restaurants to offer Subtle Tea by the glass.

In mid-2019, Subtle Tea moved from the incubator to a 3,000-square-foot facility in Ronkonkoma. It purchased a 400-gallon brew kettle with the help of an SBA loan and a grant from the Manufacturing and Technology Resource Consortium (MTRC), the Manufacturing Extension Partnership (MEP) Center for Long Island. Subtle Tea also got its labeling and shrink-wrapping equipment out of the back yard.

“Our capacity has increased along with our efficiency, having everything under one roof,” Chandler says. “Now we have some tremendous opportunities with accounts we’ve been developing, including quick-serve restaurants. We just got into 21 Stop ‘n Shops and if we do well this summer, we will go to 100.”

His goal is to grow Subtle Tea to a size that can not only support his family, but several others. The company has three employees–including himself and John–but is looking to hire.

“I think that is such a cool thing, when an idea can keep people healthy and happy for years,” he says.

The Build4Scale NY program offers many invaluable benefits to assist and grow your start-up and small companies.  Our live workshops provide key insight into difficult production issues and offer

The Build4Scale NY program offers many invaluable benefits to assist and grow your start-up and small companies.  Our live workshops provide key insight into difficult production issues and offer useful tools to help you evade design and production pitfalls that were maybe avoidable.  In this webinar, we will briefly talk about the additional benefits of the Build4Scale NY program and then spend time working through a few exercises normally administered at live workshops, that will better prepare your companies for growth and success.

What You Will Learn