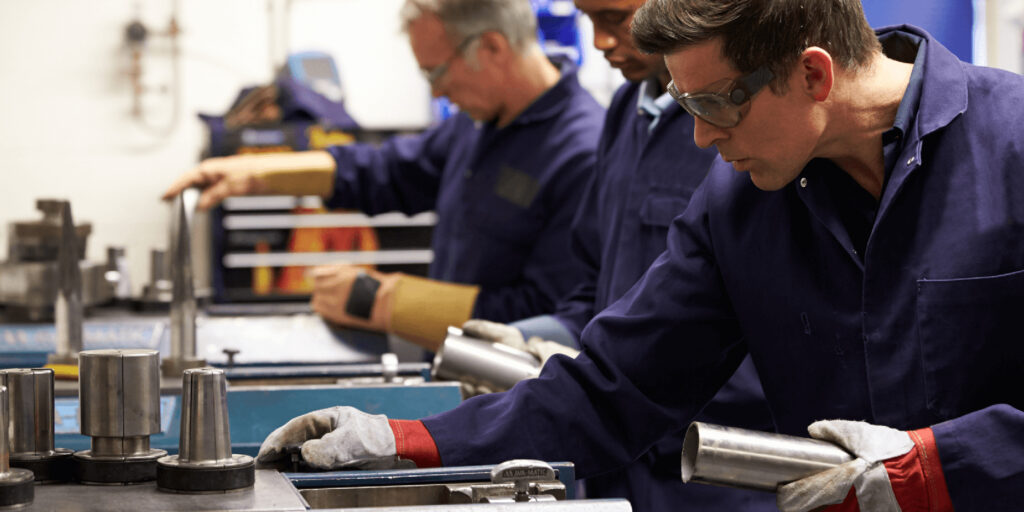 There are three things that set apart the Advanced Institute for Manufacturing (AIM)—the Manufacturing Extension Partnership (MEP) center serving the six counties of the Mohawk Valley—from the other regional MEPs in New York State.

Like its 10 counterparts, Utica-based AIM is funded by NYSTAR and the National Institute of Standards and Technology (NIST), with a mission of helping small and mid-sized manufacturers grow their businesses, retain and increase employment and enhance their profitability. But it is the only MEP center embedded within a community college, namely Mohawk Valley Community College (MVCC), and one of only two on a SUNY campus of any kind.

The second thing that differentiates AIM is its focus area, which is cybersecurity. This is due in large part to the industry’s prevalence in the Mohawk Valley, including work done at the Air Force Research Lab at the Griffiss Business & Technology Park in Rome, NY, the nationally recognized programs offered by academic institutions in the area, and the presence of dozens of cybersecurity firms.

Thirdly, AIM and MVCC play a key role in workforce development as home to the SUNY Apprenticeship Program (SAP) for Advanced Manufacturing, Cybersecurity/IT and Other Industries, administering funding for the instructional component of such apprenticeship programs for students at every community college in the state.

All three of these things are important to Mark Cushman, Vice President of Organizational Development and Human Resources at Oriskany-based Giotto Enterprises, a world leader in fiber optics. Cushman is a 1981 graduate of MVCC and has remained involved with the college over the years, now serving on the AIM advisory board. He has worked closely with AIM Director Cory Albrecht on apprenticeship programs, and one of Giotto’s seven affiliate companies, FIS Blue Inc., received a cybersecurity assessment through AIM that enables it to bid on and receive prime contracts from the U.S. Department of Defense.

“I probably speak with Cory at least once a week on different programs,” Cushman said. “That is the level of partnership, the level of trust, and the level of collaboration that Giotto Enterprises has with MVCC and AIM.”

“So, for manufacturers in that space in New York, this is very, very important and very, very serious,” Albrecht said.

To help manufacturers meet the new standards, the DoD awarded funding to Empire State Development, which last October named AIM and MVCC as lead administrators for the New York State Cybersecurity Assistance Grant Program. Companies that joined the grant cohort were awarded up to $6,000 toward a $7,500 cybersecurity assessment. A team of experts from AIM and cyber assessment implementation partners throughout the state would work closely with the company to evaluate its strengths and weaknesses and issue a comprehensive report. After a 90-day remediation period, the team would return to confirm that the company was DFARS compliant.

Cushman said AIM helped FIS Blue, which manufactures specialized fiber optic cable assemblies for use in harsh environments including military applications, streamline the process of becoming DFARS compliant and now “here is Blue enjoying a lot of government business because they have that card in their wallet that says we comply, we are secure, and we know what we’re doing.”

AIM has met its obligations to help 67 manufacturers under the grant program, but there is still an opportunity for companies to become DFARS compliant through the MEP.

“Our cybersecurity experts built a 14-part virtual training series available on demand, which we will deliver electronically to every manufacturer in the DoD space that registers for our cohort,” Albrecht said. “It is worth $12,000, but we are giving it at no cost.”

Defense contractors and supply chain manufacturers anywhere in the state can sign up by going to the grant website and clicking “join the cohort” before the Sept. 30, 2021, deadline.

“We made the application page so simple you can do it in three minutes,” Albrecht said. “Once they join the cohort, we will immediately send them all of the AIM created self-assessment materials, which will teach them step-by-step how to perform the assessment on their own and, in essence, they will become DFARS compliant and able to remain in the DoD contract] supply chain.”

While DFARS compliance is vital to manufacturers operating in the DoD space, a skilled workforce is critical to the future of all manufacturers. Albrecht said he hears workforce concerns from every company he visits.

“A lot of your senior-level technical workers are few and far between now,” he said. “For decades, kids were told that you need to attend college for 4 years, and we missed out on the trades. But we need welders just as we do teachers. We need electricians as we need nurses. And companies are feeling that as a pain point today.”

He said students in MVCC’s technical courses get “snapped up” for well-paying jobs before they graduate from the program. He recommends companies find a way to differentiate themselves from the competition.

One way is with an apprenticeship program through the SAP. Employers sign up with the state Department of Labor to sponsor apprentices in specific, registered trades. The apprentice receives on-the-job training as well as “related instruction” in a community college classroom. As administrator of the SAP, AIM provides funding for related instruction in certain trades statewide. But, working with Giotto Enterprises, it found another way to help.

Giotto Enterprises was founded in 1985 by Frank Giotto and now has 15,000 customers worldwide and annual revenue of almost $100 million. It employs about 400 people in Oriskany, about half of whom work for flagship affiliate Fiber Instrument Sales (FIS). Cushman said Frank Giotto wanted to share the company’s success and support the trades in the Mohawk Valley by creating registered apprenticeship programs.

“AIM worked with us, side-by-side, hand-in-hand, to get the programs lined up,” Cushman said.

One of the programs Giotto and AIM jointly developed was the first, and still only, fiber optic calibration technician apprenticeship program in the state. It was approved by the Department of Labor in early 2021.

But the collaboration did not stop there. Recognizing the complexities of launching an apprenticeship program, Cushman and AIM devised a template on how it should be done.

“It is our goal to use that not only for future apprenticeship programs but when and if appropriate we could hand that template to other companies and provide them with the same level of success and assistance that AIM provided us,” Cushman said.

Cushman described Giotto’s relationship with AIM as “invaluable”—and far from over.

“AIM is a vehicle,” he said. “They make themselves readily accessible to help businesses succeed. They understand that there has to be a fit where the state agencies come in, where the private sector comes in and where education comes in, and they have this very keen ability to put these pieces of the puzzle together. They understand the dynamic, they understand the fit, and they understand that is not just an action, but it is a process. A continuous process. And that is why we trust them with a lot of programs. We have a number of programs we are talking to AIM about that are not only going to have an impact on our business but on the Mohawk Valley as well.”