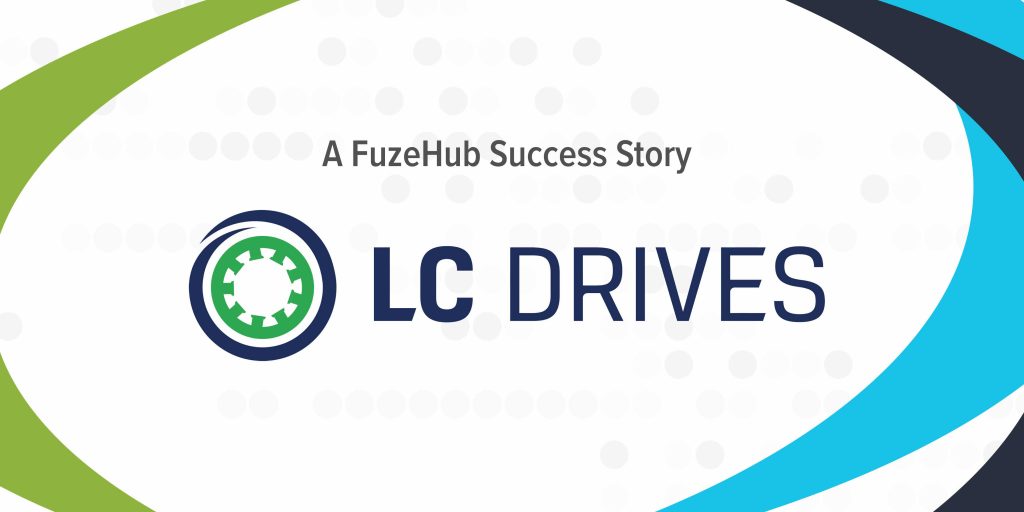 Executive Summary
LC Drives makes permanent-magnet electric motors that are smaller, lighter, and more energy efficient. The company’s technology can, for example, put a 500-horsepower motor in a 250-horsepower frame. Target markets include wind turbines, marine propulsion, vehicle propulsion and other opportunistic industrial uses.
In 2017 and 2018, LC Drives worked with FuzeHub and the Shipley Center for Innovation at Clarkson University on manufacturing scale-up. Under two FuzeHub grants, the Shipley Center’s North Country Incubator acquired first a compressed air system and then a powder coating booth that LC Drives, a tenant at the incubator, is using to scale manufacturing early and rapidly.
Situation
LC Drives was formed in 2012 and moved into the North Country Incubator in 2014.  The company has received two National Science Foundation (NSF) grants, a grant from the Defense Advanced Research Projects Agency (DARPA), and three NYSERDA grants. This early funding enabled it to develop its technology and file ten patent applications.
In May 2019, LC Drives received a $15 million Series A investment from Koch Engineered Solutions.  Back then, the North Country company had 16 employees. Today, it has 54 employees and continues to grow rapidly. Devon Sutton, Director of Strategic Operations, expects that LC Drives will reach 300 employees and $100 million in sales within five years. The company hopes to move out of the incubator and into its own nearby space, thus becoming one of the first incubator tenants to make such a leap.
Sutton attributes much of LC Drives’ success to its relationship with “great industry partners” like the Shipley Center and FuzeHub. Jamey Hoose, Director of the Shipley Center, said that LC Drives itself has been a great partner. In addition to helping equip and expand the incubator, LC Drives played a role in Potsdam’s receipt of a $10 million downtown revitalization grant from New York State. LC Drives is also helping the region by providing internships and well-paying jobs for local university students and graduates.
Needs
LC Drives required compressed air to automate and modernize its production processes and build the full-scale manufacturing line necessary for third-party testing and meeting commercial orders. The company also needed a powder coating booth to improve the quality and durability of its motors, thus enabling LC Drives to attract larger customers in target markets.
As Sutton explained, a paint job from a regular paint booth isn’t sufficient for products that must withstand harsh environments.  LC Drives’ motors operate in the engine rooms of large ships, in wind turbines, in buses, and in other places where they must withstand heavy vibration, heat, and other forces that would create nicks, scratches, and eventually rust and corrosion with regular paint.
With access to a powder coating booth, LC Drives could improve the reliability of its motors and scale its business more rapidly. Other incubator tenants with products, such as wind turbines and environmental remediation systems, that must withstand harsh environments could also benefit by having access to a powder coating booth.
Engagement
FuzeHub and the Shipley Center have worked together for years, but Hoose said it was LC Drives’ CEO Russ Marvin who came up with the idea of having his company and the Shipley Center apply for a Manufacturing Grant from FuzeHub’s Jeff Lawrence Innovation Fund to purchase shared equipment that would benefit multiple tenants in the North Country Incubator. The $75,000 grant, awarded in 2017, covered the costs of a “whole-building” compressed air system, which is critical to the operations of LC Drives.
A year later, Sutton applied for and was awarded a second Manufacturing Grant, this one for $50,000, to cover the cost of installing powder-coating equipment in Damon Hall, the incubator building where LC Drives is located. Sutton noted that FuzeHub does a “really good job” of making entrepreneurs aware of available funding opportunities and making those resources easy to access.
Outcomes
The compressed air system enables LC Drives to build out its manufacturing line and begin full-scale production much earlier than would have been possible otherwise.  Hoose recalls walking through Damon Hall just weeks after the system was installed and seeing dozens of lines running to manufacturing equipment turning out prototypes. LC Drives is now working with the Shipley Center to extend compressed air lines from Damon Hall to two other incubator buildings.  This expansion will serve two additional incubator companies, including Potsdam Sensors, a 2017 FuzeHub Commercialization Competition winner, as well as additional space that LC Drives is expanding into.
The powder coating booth also enhanced the company’s growth trajectory, allowing it to immediately target large industrial clients rather than starting with smaller customers that might have purchased motors finished with regular paint.
Sutton believes these advances made all the difference in the company’s ability to attract the $15 million Series A investment from Koch Engineered Solutions.  LC Drives was not a “tiny garage entrepreneur looking for funding,” she explains, but a “fully-established, supported company.” In turn, that $15 million led to more than a tripling of the company’s workforce and to current projected growth. LC Drives is working with the incubator to expand its footprint there and is also talking to Empire State Development (ESD) about available support for a 154,000 sq. ft. facility nearby.
__________________________________________________________________________________
“FuzeHub has been an incredible resource. At the end of the day, whether it is the Commercialization Competition, the Manufacturing Grants, or really most importantly these solutions opportunities, that is what is helping people propel their businesses forward.”
–Jamey Hoose