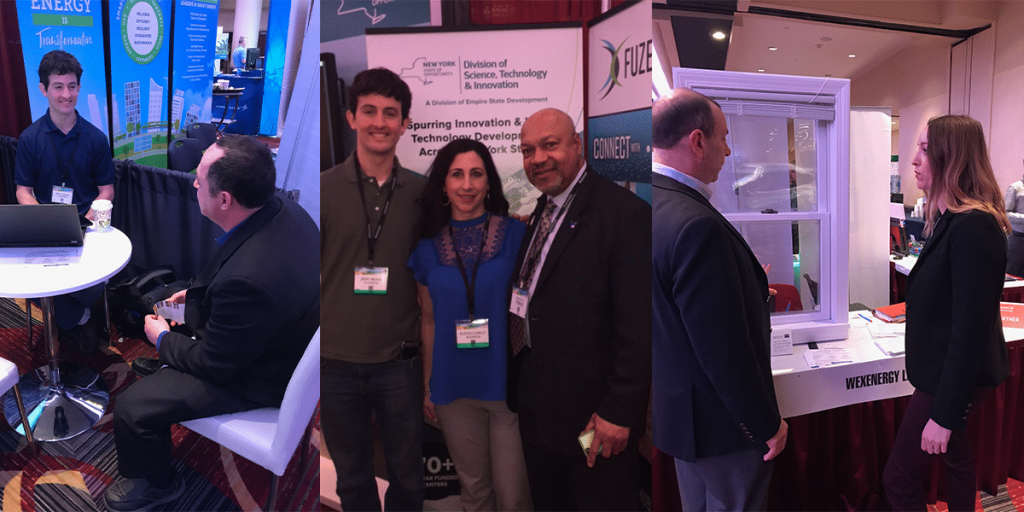 The Manufacturing and Technology Resource Consortium, a New York State-supported Manufacturing Extension Partnership (MEP) center, was among the participants. “For MTRC, being a part of the NYSTAR pavilion provided an opportunity to see what is happening now in the energy industry as well as the role that New York State has in the future of energy,” said Imin Kao, MTRC director and associate vice president of economic development at Stony Brook University. “This conference allowed me to gain exposure to many companies and have preliminary discussions with these companies to highlight the resources that an MEP can provide.”

Held bi-annually in New York City and hosted by the NYSTAR-supported Advanced Energy Research and Technology Center at Stony Brook University, the AEC demonstrates how decades of research and development in renewables, batteries and other technologies are realizing their potential as vibrant industries and economic drivers.

Other NYSTAR-supported innovation assets participating in the conference include multiple Centers of Excellence and Centers for Advanced Technology. Over three days, representatives from these organizations will talk to energy companies from around the world about the expertise they can offer them in areas like additive manufacturing, ceramics technologies, sustainable manufacturing, automation and electronics. FuzeHub representatives are available to coordinate follow-up engagements and referrals for companies seeking technology resources in New York.

The New York State presence also provided an opportunity for more than a dozen cleantech companies to showcase their products and technologies.

Hongfei Li of ChemCubed, a Stony Brook-based company that develops high-performing custom chemistries for 3D printing, was eager to take advantage of the invitation to participate in the conference.

“The most valuable part is being able to talk to so many people. It is a great space to share experiences and generate innovative ideas,“ said Li. “Even though we are not directly connected to the energy industry, the conference allows us to learn about different applications for our product which can lead to potential future customers,” added Li.

“Being a part of the NYSTAR pavilion at AEC 2018 has been very worthwhile,” said Nigel Shepherd, vice president for sales and business development for LC Drives of Postdam. “We appreciate the generous invitation from the Syracuse Center of Excellence as it allowed us to obtain some leads, speak to potential investors, and establish important connections within the greater energy community.”

New York State ranks second in the nation for battery technology patents, and third for the number of wind and cleantech patents. With aggressive targets for shifting further toward renewable energy use, the state has a number of programs supporting the advancement of energy storage and energy efficiency technologies.