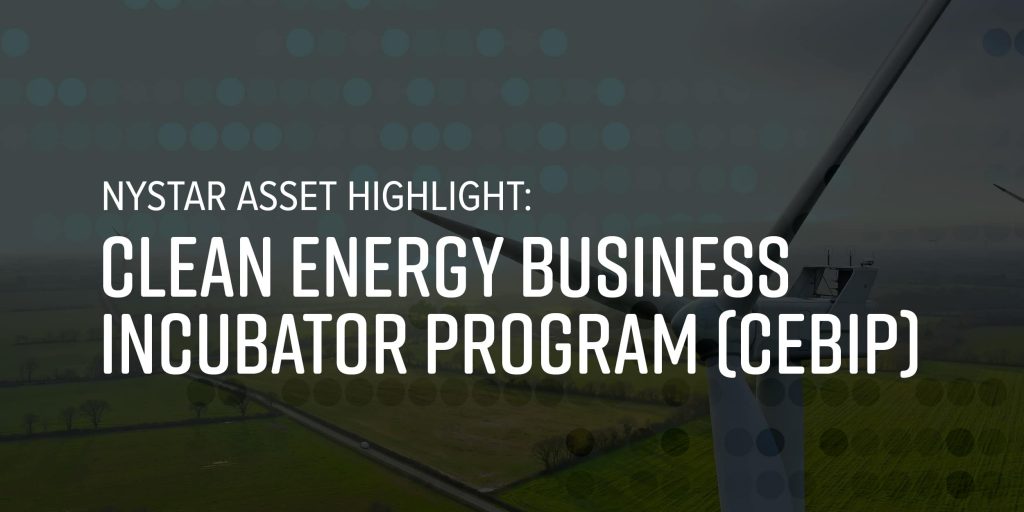 When Paul Schwarz, Director and Co-founder of ThermoLift Inc., was asked if the company would be where it is today if not for the Clean Energy Business Incubator Program (CEBIP) at Stony Brook University, he answered quickly and decisively.

The Stony Brook-based company, which developed a new thermodynamic process that uses natural gas, hydrogen or biofuels to heat or cool residential and light commercial buildings, is a 2020 graduate of CEBIP, one of six clean energy incubators sponsored by the New York State Energy Research & Development Authority (NYSERDA).  Schwartz said ThermoLift made sure to take advantage of every resource CEBIP had to offer—and that is a lot of resources.

“We work with our members on virtually every aspect of their business,” said David Hamilton, Executive Director of CEBIP. “We sometimes know more about the company than the entrepreneur.”

CEBIP was founded in 2011 to assist pre-seed companies develop the next generation of clean energy technologies.  As a virtual incubator, it can work with entrepreneurs based anywhere in New York State. At NYSERDA’s request, CEBIP recently expanded its reach nationally. It has admitted a California company whose technology could ultimately benefit New York.

New York has put a premium on combating climate change through clean energy initiatives. In 2019, it passed the Climate Leadership and Community Protection Act (or simply the Climate Act) which includes such ambitious goals as achieving 100% emission-free electricity by 2040 and reducing all emissions to at least 85% below 1990 levels by 2050.

“What CEBIP and the other clean energy incubators do is work with startups that have technology that may have an impact on these goals and missions,” Hamilton said. “These startups may have technologies that have not been considered or developed by the larger folks. So, it is critical that we help them move forward, because somebody could have that technology that takes us over the top and helps us achieve the goals I think we all know we need to achieve.”

He said the incubator works closely with its portfolio companies to “help them figure out what they want to be when they grow up.” The CEBIP team helps entrepreneurs perfect their technology, devise their commercialization plan, develop their business strategy, build their corporate structure and culture, handle their intellectual property and legal matters, create their pitch deck to attract investments and much more. The team includes a 26-member advisory board made up of a diverse group of volunteers who work with the startups to provide expertise in areas the companies may be lacking.

“We do a lot of one-on-one mentoring,” Hamilton said. “We have monthly phone calls with each company, but usually we have weekly or daily emails, too. We push them on deadlines. We push them on deliverables. We offer workshops and seminars. We try to bring as many resources as we can to our companies depending on their wants and needs.”

Schwartz, of ThermoLift, wanted and needed it all.

“We made an aggressive effort to utilize all of those channels,” he said.

When Schwartz first approached CEBIP in 2012, ThermoLift consisted of himself and a partner, Dr. Peter Hofbauer, the former global head of engineering and power train development at Volkswagen. Their idea was for a new, high-efficiency heating and cooling technology.

Today, the company is headquartered at Stony Brook’s Advanced Energy Research and Technology Center (AERTC), a NYSTAR Center of Excellence, and has manufacturing facilities in Michigan.  It employs more than 30 people, including several Stony Brook graduates who started as interns, and has signed contracts with multiple utility companies across North America for demonstration projects set to begin in the first quarter of 2021.

Plus, it has a new CEO in David Parks, the former head of Goodman, a major residential HVAC company.

“Think about that,” Schwartz said. “In 2012 we were this zero company that nobody knew about and I went to the incubator to ask for their assistance with a business plan and a pitch deck. Eight years later we have a guy who ran a $3 billion HVAC company who wants to be the CEO of our company.”

He said CEBIP connected ThermoLift to the right people, like Bob Catell (the former chairman of National Grid and current chairman of  AERTC) at AERTC to validate its technology—an important step in winning investor confidence—and helped it perfect its presentation to those investors, starting with the Long Island Angel Network. That pitch led to $1.6 million in first round capital and introduced the company to Jim Simons, one of the world’s most successful hedge fund managers. Simons has continued to invest in ThermoLift as the company developed.

Other contacts made through CEBIP also have proven valuable, providing speaking opportunities, grants, admission to a national incubator and introductions to industry leaders.

“We attended as many events and conferences as possible,” Schwartz said. “There is always a networking opportunity wherever you go, and that can’t be replaced. This is why CEBIP was really an invaluable asset in our strategic growth and the capital we raised over time, the number of patents we’ve filed and many other things.”

Hamilton said ThermoLift is “probably the epitome of what I would want a startup company to be in my incubator.”

Another prime example of a CEBIP success story is not an energy company but fits within the incubator’s broader mission of greenhouse gases, sustainability and agriculture. NYC-based Re-Nuble turns organic waste into organic hydroponic nutrients for use in controlled-environment farming.

Tinia Pina, Founder & CEO of Re-Nuble, said the company’s mission is to take food waste—which is abundant, particularly in urban areas—and produce an alternative to the mineral salts commonly used in soilless farming. Mineral salts are subject to pricing variability and costs are expected to surge as phosphorus grows scarce.

“Re-Nuble is the answer, to make our food system more resilient by using local waste streams as a main substitute for mineral salts,” Pina said.  “We want to give farms the ability to increase their profitability, lower their carbon footprint and hopefully increase the nutrients in the produce available to the consumer.”

Re-Nuble joined the incubator about five years ago and graduated in November. In 2015, it had plans to build a manufacturing facility in the South Bronx and was focused on a liquid product that was expensive to make and ship and did not perform well in soilless farming.  CEBIP helped the company pivot to developing a pelletized product and connected it to M-Corps, a statewide cleantech manufacturing program, which in turn guided it to building its manufacturing facilities in Rochester, where space is more available and more affordable than in the Bronx.

She added that the technological expertise and scientific approach of the CEBIP team and advisory board were vital in helping Re-Nuble with the “technical readiness” of its product, something the food and agricultural-based accelerator programs she took part in did not offer.

“We were experiencing some challenges on the manufacturing redesign,” she said. “Just having one-on-ones and the monthly advisory phone calls allowed us to make sure we were asking and answering the right questions so that we could manage outsourced engineering teams effectively to help us reach an outcome sooner. A lot of those times, with those challenges, you don’t really know what you did wrong until you’ve already done it wrong so I think CEBIP saved us time and money in realizing how we could reposition things or do things differently sooner.”

“She listened to everything we said,” he added. “She didn’t always do everything we said, but that’s ok.  As an entrepreneur you need to have your own vision and goals and make your own decisions. But if you are going to be part of a program like this you need the ability to listen to your advisers, process what they are saying and then make decisions. Tinia always listened and then made her own decisions.”

Pina said the incubator also was instrumental in helping Re-Nuble secure much-needed capital, including an angel investment and some state grants.

“Where we stand today is, we definitely have got a lot of traction as a result not only of CEBIP but of New York’s ecosystem really coming together to accelerate and fund climate tech solutions and help to decarbonize the economy,” she said. “I think Re-Nuble has definitely benefited from that by having CEBIP almost as an extension of our team with eyes and ears on the ground for us to identify opportunities we would not otherwise have had.”