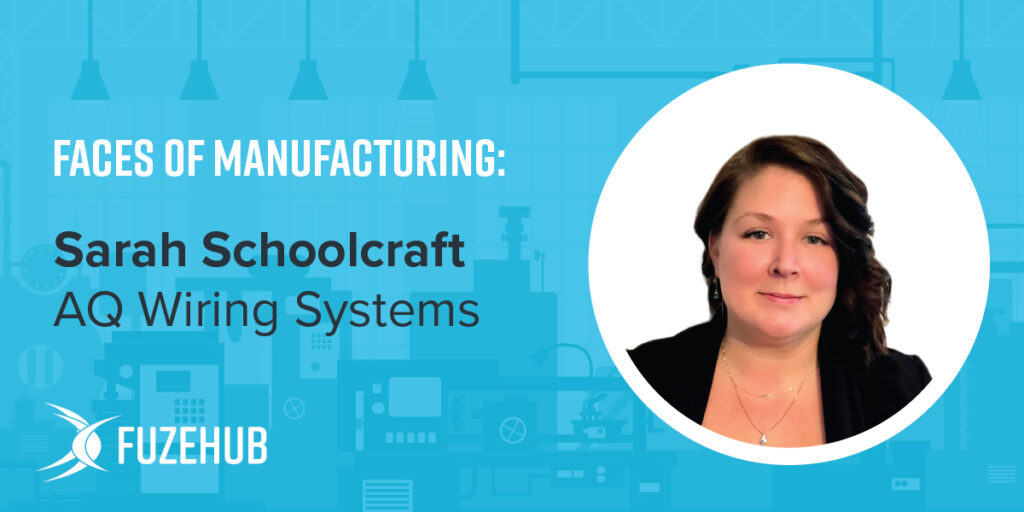 AQ Wiring Systems, in Plattsburgh, manufactures custom electrical components including wire and cable harnesses, complex electromechanical assemblies, and, increasingly, high voltage cables for the electric vehicle market. Founded in 1991, it became part of the AQ Group, a global manufacturer based in Sweden, in 2018. Currently, the Plattsburgh operation is parented by the North American headquarters in St. Eustache, Quebec.

“There is a lot of moving and shaking going on here,” said Sarah Schoolcraft, Sales Development Manager for AQ Wiring.

“It’s an exciting time to step into this business,” she said.

Schoolcraft came to AQ Wiring with a diverse sales background, and early on in her career seized the opportunity to work for Palmer & Young Inc., a pharmaceutical representative headhunter.

“Rebecca Palmer took me under her wing and saw that I had inherent ability to do sales,” she said. “She groomed me and mentored me at the beginning of my career.”

In her mid-20s, Schoolcraft moved to Montreal to work for an IT company, first in a general sales position, and was later promoted as a software security product specialist. At this job she managed a sales team of four, that handled web demonstrations and sales for all of North America. Schoolcraft also enjoyed time in the not-for-profit sector, when she took a position as an Account Executive with Mountain Lake PBS located in Plattsburgh, NY. This role led to a similar position with the neighboring Vermont PBS station where she was promoted to a senior role and managed the underwriting team for her department.

Then COVID hit, and, like many people, Schoolcraft laid low for a while. In early 2022, she joined AQ.

“Sales is sales, but this is so different from any sales job I’ve ever had because manufacturing is just a totally different world,” she said. “I like it.”

Settling into her role at AQ

Schoolcraft has taken responsibility for all U.S sales and has worked to move processes to Plattsburgh that were previously handled in Quebec—including proposals and price quotations. She oversees the Documentation Department with two people reporting to her and expects to add at least one more to the team in the coming months.

Schoolcraft is proud to represent the AQ brand, and says “We are under the AQ Group, but they want an entrepreneurial mindset, with each location managing our own business while following the AQ values and guidelines.”

While Plattsburgh focuses on electrical components, other AQ locations process sheet metal or other related products. Part of Schoolcraft’s job is to work within that global footprint to get customers the best pricing on all aspects of their projects.

A time for growth

At the moment, Schoolcraft’s primary focus is to grow the AQ customer base and lead her team within the Documentation Department.

“Basically, I was brought on to help diversify our client base,” she said. “Hopefully we can increase the capacity of the Plattsburgh building by bringing on more clients and more revenue and as we do that we can grow. That would be a win for not only AQ but for Clinton County because the more business and revenue we bring in, the more people we can employ.”

Meanwhile, Schoolcraft herself is growing.

“This job keeps me on my toes, there are a lot of moving parts,” she said. “There is a lot to know just from a technical aspect, which I find completely fascinating. I enjoy learning, so this is one of the many reasons I took this position. Not to mention that culture is huge for me and the culture here is amazing. I feel 100 percent supported by the executive staff around me and my team.”