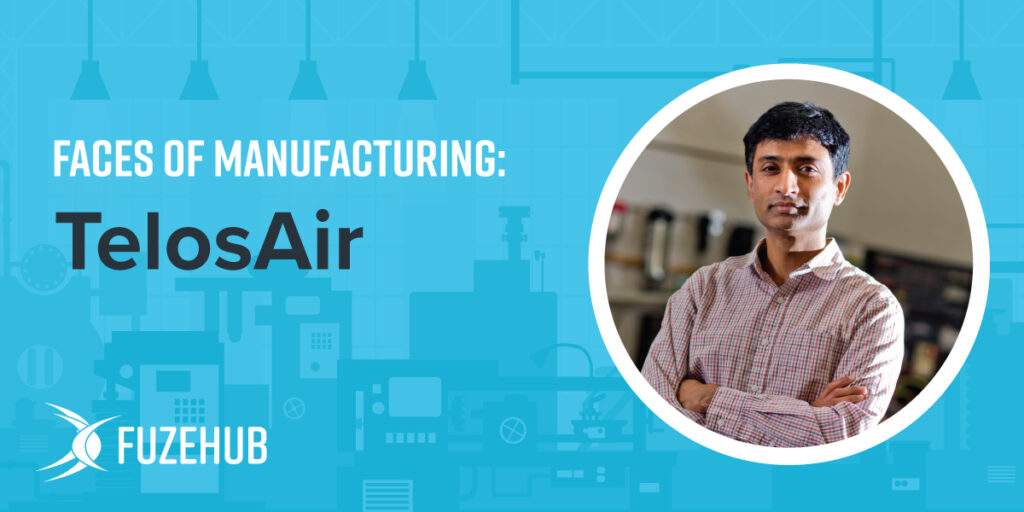 TelosAir is a Potsdam-based startup engaged in the development of compact, low-cost air quality sensors for use in critical indoor spaces such as hospitals, high-tech manufacturing, and commercial offices, as well as providing data intelligence to guide mitigation measures.

“We started off as Potsdam Sensors about five years ago,” said Suresh Dhaniyala, President and CTO of TelosAir. “The 2020 name change reflects the expansion of what we are doing from being purely a sensor company to being a sensor plus data company.”

Dhaniyala, a professor of Mechanical and Aerospace Engineering at Clarkson University, began 20 years ago to develop air quality sensors for use in his own research, with the help of state and federal grants. Then he realized something.

“When we looked at air quality sensors available on the market, most of them were marketed by IoT companies with no air quality expertise,” he said. “The technology was inadequate. We saw we needed to take what we were doing in the lab to the real world.”

Funding from the National Science Foundation (NSF) enabled Dhaniyala’s team to hone its sensor and demonstrate the ability to not only detect particles that were invisible to existing technology but also determine exactly what those particles were. Even before COVID, Dhaniyala had his eye on monitoring airborne pathogens to prevent hospital-acquired infections.

“With that vision and realizing there wasn’t anything on the market to do that, we set out with this company,” he said.
In 2017, Potsdam Sensors was a $50,000 winner in the first FuzeHub Commercialization Competition. Dhaniyala said that with an NSF grant ending, “this was extremely timely in keeping us alive until our next grant came.”

That was not all it did.

“It was very early in our timeline, and we were very product-focused,” he said. “We hadn’t really thought about commercialization or manufacturing yet. It was fantastic to get some validation.”

Plus, by attending the New York State Innovation Summit that accompanied the awards, Potsdam Sensors made manufacturing connections “that have been helpful to this day.”

Over the past few years, TelosAir prototypes have been deployed with 13 clients, including the U.S. Air Force, in five countries. Through client feedback, the company has fine-tuned its sensors—making them more robust and easier to use—and determined a price point the market could bear.

“Those discoveries helped us hone our product,” Dhaniyala said. “Of course, customer discovery is happening every day and we are learning more and more.”

The company also realized that the complex, big data being generated by the sensors needed to be properly interpreted before the clients can act upon it.

“Our analytics need to inform the building management system about necessary actions to optimize the quality of air while ensuring energy efficiency,” Dhaniyala said.

TelosAir sensors communicate wirelessly via radio with a secure central gateway, which, in turn, communicates with the building management system and the cloud. Clients can access real-time data from the cloud through a responsive dashboard.
The company got another boost from FuzeHub in 2021, in the form of a $10,000 Manufacturing Grant. It used the money to work with a designer and a prototype builder to turn its “bench-top” sensor enclosure into something attractive and manufacturable.

The company has since hired a CEO to drive the sales, marketing, and venture capital aspects of the company, “which is the next progression,” Dhaniyala said.

“On the tech side, we are very confident in what we have so we’re ready to hit the market.”

While still in the prototype stage, TelosAir has had some exciting things happen. NASA took over funding from NSF and is supporting the development of a next-generation sensor, which will be on the Artemis rocket to the moon. The company also is collaborating with South Korean scientists to deploy the sensors for drone-based air quality measurements.

“We’re also going through a certification process so we can put units in hospitals and other places where that is required,” Dhaniyala said. “That requires getting our design to a point where we can mass produce, so that is the next big step.”

His plan for the next few years is to have sensors installed in at least 10 hospitals and 30-40 other large spaces.

“These units will be generating megabytes of data per client per day,” he said. “We want to make sense of that data, guiding clients toward healthy air, energy efficiency, sustainability, and cost savings. We want to go from being purely a manufacturing company to a company that is helping our clients use sensors for energy management.”