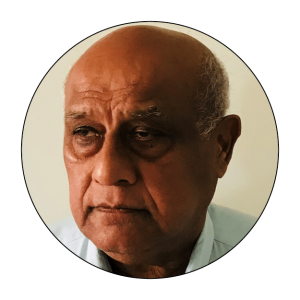 Babu Khalfan is the founder of Signs & Decal, a business producing high-end architectural signage in New York City. Born and raised in Madagascar, Babu started his career in Tanzania before moving to New York City, where he launched Signs & Decal in 1970 along with his wife, Tazzim. Now, Signs & Decal is one of the biggest sign companies in the city.

Over the last 47 years, Signs & Decal has boomed. Its work has appeared in high-profile projects across the city such as the World Trade Tower, JFK Airport, La Guardia, Bank of America Towers, Penn Station, Grand Central Station, Hudson Yard Project, and many others. Since producing architectural signage is highly complex and detail-oriented work, it requires careful thought and long-term planning. Babu has produced a lot of fascinating work for the transportation business, such as work for the George Washington Bridge, as well as for over two hundred Amtrak stations across the country.

A Man of Distinction

“Working hard is one thing and constantly keeping on top of the industry is another thing, and all of this makes you the best in the industry,” Babu attests. Several landmark projects saw the light of day under Babu’s leadership, for which he was honored with the MSDA Regional Minority Manufacturer of the Year 2000 Award by the U. S. Department of Commerce. Babu was also honored with the rank of Honorary Battalion Fire Chief by the New York Fire Department in 2001 for his contribution to a post 9/11 project, for which he created a memento using steel from the destroyed building as a memorial to honor those who had died. “This was sent all over the world,” he says. “Every fire department in the US and emergency services got one.”

Babu has also authored a book called India 2000+, in which he shares his vision, ideas and inspirations based on his life. He is presently working on another book titled New York City: The Capital of the World, which he has spent several years researching and writing, and which is slated for launch soon as a coffee-table book.

Slowly, Babu’s sons Ali, Abbas and Hassain are transitioning into roles of responsibility in running the business alongside their father, of which Babu remarks that the transition is “very satisfying to see…. but it’s not easy!”

Rajeev Sharma, Director of Client Services at ITAC (New York City’s Manufacturing Extension Partnership Center), believes that one of Babu’s core strengths is his ability to “train and bring the best out in people”, citing “fabricators, welders, and designers” as examples. “That’s one of the unique things, having known Babu so long.”

ITAC has been the consultant for Signs & Decal for over ten years. From advising the management to aiding in the development of their employees, ITAC has helped make Signs & Decal proficient and compliant in the chemical etching of various metals and has also helped the company apply for EBZ, QEZZE, ICIP, ICAP, ECSP, and ReCharge incentives.

Teaching the Next Generation

Seeing a need for imparting training and specialization in the art of architectural sign fabrication, Babu is working on plans for building a school where students can learn from his decades of experience in the field. Whether they “choose to progress in the signage industry or practice the trade at their own volition,” Babu believes the school could have a lot to offer.

The signage industry is fast-growing and interconnected with scores of other industries. “You are constantly learning new things,” Babu adds, highlighting the need to bridge disciplines like weaving, printing, graphic design, engraving, welding, and installation for a successful design output. “Today, there are over 40 different technologies and processes used in the production of graphics and signage.”

“To be number one is one thing. To stay number one is another thing,” Babu says, speaking to the ever-evolving technologies, materials and machines involved. “We have to keep ourselves up to date with new inventions.” Moreover, “every design is different and every material is different”, he adds.

When asked about retiring, Babu declared: “I will never retire because I don’t consider myself old!” While still working on the marketing, accounting and other aspects of the business for Signs & Decal, Babu is also writing more. “If you analyze me, I’m probably working harder now than I was before. I’m not retiring but working harder!”