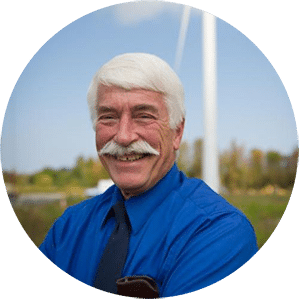 "As a child, Bechtold was fascinated by what he calls “the magic of energy”. Kites, balsa wood model airplanes, and wood-burning projects with a magnifying glass and the sun’s rays captured his attention. Then he discovered toolmaking."

HARBEC of Ontario, New York makes tightly-toleranced prototypes, tooling, machined components, and injection molded parts for a range of industries. Now celebrating its 40th anniversary, the Rochester-area company is also a leader in additive manufacturing (AM) and is so committed to sustainability that it’s regarded as one of the country’s most environmentally-friendly manufacturers.

For Bob Bechtold, HARBEC’s founder and president, the journey began long before CNC machining, which, along with mold manufacturing, is one of the company’s core capabilities. As a child, Bechtold was fascinated by what he calls “the magic of energy”. Kites, balsa wood model airplanes, and wood-burning projects with a magnifying glass and the sun’s rays captured his attention. Then he discovered toolmaking.

“I’m a toolmaker,” Bechtold told FuzeHub as he traced his introduction to the trade after high school. Following an apprenticeship and three years of military service, Bechtold worked as a journeyman toolmaker and recalls that he had “no trouble at all finding a job.” Although a career at a GM plant promised stability, this U.S. Army veteran wanted something more.

At the National Technical Institute for the Deaf (NTID), a college of the Rochester Institute of Technology (RIT), Bechtold applied what he learned in the shop and at SUNY Institute of Technology at Utica-Rome. For seven years, he taught NTID courses in disciplines such as machining and precision measurement. From punch cards and paper tapes through numerical control (NC) and then computer numerical control (CNC) machining, he saw opportunities where others saw only challenges.

“At that time,” Bechtold remembers, “CNC equipment was touted as the end of the toolmaker.” CNC machines seemed “faster, smarter, and more reliable”, he says, but “they were actually the greatest empowerment tools that had ever come along in the history of the toolmaker.” As Bob Bechtold accurately predicted, the toolmaker of the future would need both a toolbox and a computer.

Focus on the Future

In 1977, Bechtold started HARBEC as a contract tool-and-die and general machine shop. A few years later, he moved to the farm where he still lives today and installed his first wind turbine. Wind power for electricity was a novelty back then, but that didn’t keep Bechtold from experimenting with solar and geothermal, too. Alternative energy for HARBEC seemed possible, but financing was problematic.

Since then, NYSERDA has awarded HARBEC a $400,000 project for energy-efficient 3D printing. The company has also engaged High Tech Rochester (HTR), its regional Manufacturing Extension Partnership (MEP). When HTR nominated HARBEC for the 2011 “MEP Excellence in Sustainability Award,” the National Institute of Science and Technology (NIST) named HARBEC the winner of a nationwide competition.

Annette Brenner, HTR Client Development Manager, praises HARBEC for “constantly demonstrating a commitment to sustainability and a willingness to lead in technology development.” As a partner, she adds, “HARBEC supports established customers and entrepreneurs with product development through creative design, additive and subtractive manufacturing, rapid prototyping, mold manufacturing, and injection molding—all with a focus on sustainability.”