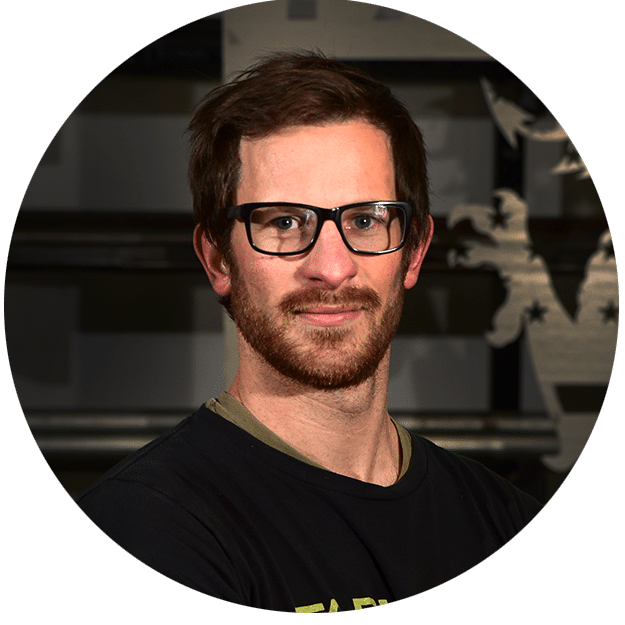 “Humans were meant to build things,” he explains, “and we were meant to have difficult times.” At the end of the day, however, “you can make a good honest living with your hands.”

Fabwell Studios of Rochester, New York provides metal fabrication and welding services for custom projects. The company specializes in food-grade steel and tungsten inert gas (TIG) welding, but also makes hand rails, exhaust systems, signage, artwork, and safety screens for professional baseball teams. “We truly are a custom shop,” says Philip De Mattia, the company’s owner. “We’re too dumb to be engineers,” he jokes, “and too smart to be fabricators.”

De Mattia, a native of Wales, understands the value of hard work. As a teenager, he attended trade school in the United Kingdom. “The education is very different there,” he explains, and spanned 12-hour days and six-day workweeks. “That would probably be considered child abuse in the U.S.,” he half-jokes. But when De Mattia was just 13, he decided to enroll in trade school because he knew he wanted to build things.

Part of his interest in metalworking surely came from his family. De Mattia’s older brother preceded him at the school and his father, who’d built a replica Sherman tank out of aluminum, handed down a do-it-yourself philosophy. “The family’s mindset was ‘you have to fix it yourself,’” Philip De Mattia explains. “That’s how they navigated the world.”

In addition to becoming an expert fabricator, De Mattia became a professional bike rider. That’s how met his future wife and moved to the United States. Yet his American story didn’t start with a happy ending. After taking a union job, De Mattia says he “fell out of love with fabrication.” Eventually, he’d take his tools and leave. He didn’t own his own workshop at first, but customers who liked his work would seek his services.

De Mattia’s first space was a corner in a friend’s building. “We didn’t have money to buy, but we didn’t want to borrow,” he recalls, so he worked full-time, poured his earnings into the business, and bought a welding machine. Four months later, De Mattia hired his first employee. He then moved to his own 4,000 sq.-ft. building, hired two more workers, and took on what he calls “bigger projects and larger tools”.

For Fabwell Studios, a current contract to build three full-size American Ninja Warrior training facilities is providing a high-profile opportunity. On this nationally-broadcast television show, extreme athletes seek to complete an obstacle course that few have finished. As De Mattia explains, the show’s “franchise” model prompted an equipment designer who noticed his work to seek his services. But appearance isn’t enough.

An extreme athlete himself, De Mattia welcomes the requirements for this project. “Foot and feel” usability are important, he says, but so is the ability to build structures cost-effectively. “We use the right equipment and we cut the right way,” he explains. Fittingly then, the company’s local customers include Zweigle’s and Genessee Brewery, food and beverage companies that need expert fabrication and welding.

Fabwell Studios is continuing to grow, but Philip De Mattia still finds time to ride his BMX. He also works with a local mentor, Jeff Mucha of the EEP Quality Group, who introduced De Mattia to Lynn Freid, the Regional Director for the Workforce Development Institute (WDI). Recently, Fabwell Studios received a WDI grant for a hydraulic press brake.

“You have to have good tools,” De Mattia explains, so that “everyone goes home” safely at the end of the workday. Finding good employees can be challenging, but De Mattia is ready to train his own workforce if necessary. “Humans were meant to build things,” he explains, “and we were meant to have difficult times.” At the end of the day, however, “you can make a good honest living with your hands.”

A cybersecurity self-assessment is mandatory for all companies needing to comply with NIST SP 800-171 requirements. To explain these requirements and guide you through the assessment, the New York Manufacturing

A cybersecurity self-assessment is mandatory for all companies needing to comply with NIST SP 800-171 requirements. To explain these requirements and guide you through the assessment, the New York Manufacturing Extension Partnership and its partners are offering a complimentary online workshop.
Attendees will also learn about the Supplier Performance Risk System (SPRS). We will show you how to determine your SPRS score so it can be submitted for DoD contract opportunities.

Join us on July 15, 2021 from 9 AM to 1 PM for a Cybersecurity Assessment Workshop that will give you the tools you need to succeed.

Strengthening New York’s Industrial Base is for all of the links in the NYS supply chain for the U.S. Department of Defense. Whether you’re a prime, a subcontractor, or at the

Strengthening New York’s Industrial Base is for all of the links in the NYS supply chain for the U.S. Department of Defense. Whether you’re a prime, a subcontractor, or at the lowest-level tier, you’ll make strong connections that can help your business grow.

Come join the rest of New York’s industrial base as we face common challenges ranging from cybersecurity and supplier vetting to workforce training and manufacturing efficiency. If there’s a challenge that you’re facing, you don’t have to fight the battle alone.

Register now and then join us on Wednesday, August 11th. This event is organized by FuzeHub in partnership with TDO and the Advanced Institute for Manufacturing (AIM).