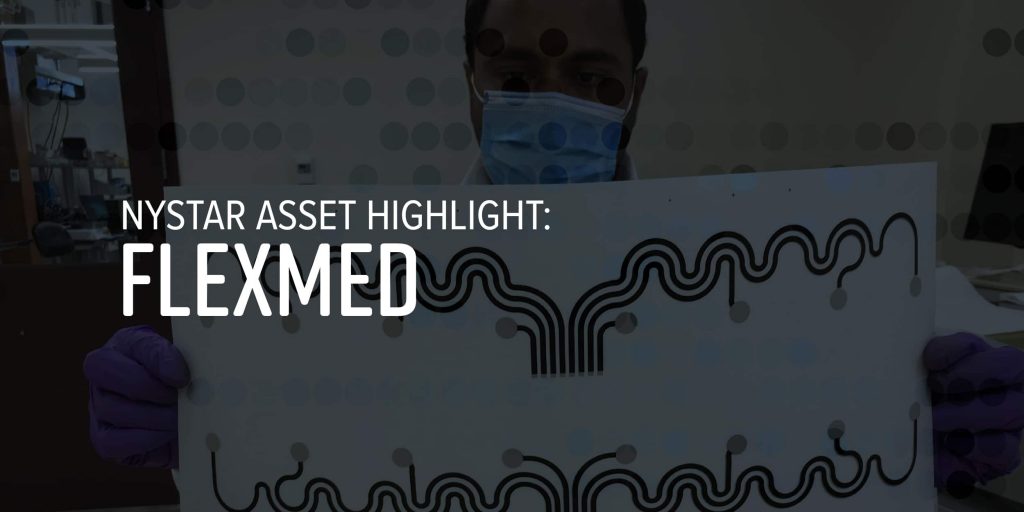 What do they have in common? They all are engaged in the emerging field of flexible hybrid electronics—combining high-performance silicon devices with flexible printed surfaces such as plastic films, fabrics or papers. And they all have sought the assistance of Binghamton University’s Center of Advanced Microelectronics Manufacturing (CAMM) and its FlexMed or flexible hybrid medical device manufacturing initiative.

CAMM had been formed 15 years ago when the United States Display Consortium, now known as the FlexTech Alliance, selected Binghamton University to spearhead development of next-generation roll-to-roll (R2R) electronics manufacturing capabilities.  The award included $10 million in equipment, which was installed in the former IBM facility in Endicott.  In 2018, NextFlex, part of FlexTech and DoD’s Manufacturing USA network, designated Binghamton University as the New York “node” for its flexible hybrid electronics initiative. In June of 2019, the new FlexMed was designated a Center for Advanced Technology (CAT) by Empire State Development’s Division of Science, Technology and Innovation (NYSTAR) and awarded about $9 million in funding over 10 years.

“The CAT designation helps us to support our staff, who then in turn help companies,” said Mark Poliks, Empire Innovation Professor of Engineering at Binghamton University and Director of CAMM.

That help includes performing research studies, testing materials and device prototypes, providing guidance on proposals for federal funding, and acting as a point of contact for the flexible hybrid electronics community in New York State and beyond — connecting manufacturers, suppliers and service providers to each other.

“We are here to serve New York State companies, including helping them recover from our current situation and get back to business,” Poliks said. “Often there are services that we provide that they might have problems doing at the moment.  We are delighted to assist and have an enabling role in moving their technology and business forward.”

Some of the projects FlexMed is supporting include technology that could help with the pandemic, including wearable tags to monitor people in isolation and imaging technology, under development at General Electric, to check the lungs for COVID 19 and other conditions using electrodes applied to the chest rather than a CT scan.

Nancy Stoffel, Platform Leader for Flexible Hybrid Electronics at GE Global Research in Schenectady, said she has worked collaboratively with Poliks and his team for about 5 years, taking on at least 10 NextFlex-backed projects, both medical and industrial, in that time.

Medical projects include the imaging technology and a “smart blanket” to monitor premature infants in incubators. On the industrial side there is an RF torque sensor system designed to measure the “twist” on a rotating shaft that transfers power from an engine to a propeller.  The technology—which is designed to provide closed-loop engine control for improved performance and longer life—has been applied commercially in a GE helicopter engine, and the company hopes to scale it for use in larger industrial settings like steam and gas turbines and windmills and make it easier to install in the field so existing equipment can be updated.

“Right now, we have it down for that one application, but if we could do it larger with fewer attached parts, make it more scalable and make it field retrofittable, we have the potential to transfer technology we developed for one high-end application to a variety of applications,” Stoffel said.

The key advantage in printing is the ability to scale the system to meet the needs of large-scale equipment, from 3 feet in diameter to diameters up to 6 feet to make the system useful for hydro plants and wind turbines. The ability to print conductors, resistors and capacitors also simplifies the assembly process. It needed someone who could do this work, and Poliks suggested Tapecon, a 100-year-old family-owned manufacturing services and application engineering support company in Buffalo.

“So, Mark’s team is doing the performance characterization from a reliability point of view,” Stoffel said. “We are the system design team.  And Tapecon is handling the manufacturability piece. That is a nice example of the way the Binghamton University people can put teams together.”

She said GE expects to do more work with Tapecon because “they seem eager to expand their business into these new areas, so it seems like a nice match.”

Steve Davis, president of Tapecon, said the company does indeed want to do more with flexible hybrid electronics. This is why he was one of the first to write to NYSTAR in support of FlexMed’s creation. The relationship has paid off, not only in connections and opportunities, but in guidance and services.

“What they are really helping us with is circuit development and research on circuit design, as well as prototyping, process development and lab testing,” Davis said. “They have the equipment and resources we don’t have.  What is nice is that we can leverage them as an outsource provider and get FlexMed people and resources involved to give us some additional service capability.”

He added that having FlexMed as a partner, especially in the early phases, enables Tapecon to turn projects around more quickly and give customers the speed to market they are looking for.

While GE and Tapecon are both well-established companies, FlexMed also works with startups.

“For example, we are working with a couple of small companies to write proposals to federal agencies to obtain funding to develop their technologies to the next level,” Poliks said.

One such company is CathBuddy, Inc. an early-stage medical device company in Syracuse. Founder and CEO Souvik Paul said the company is in the R&D phase of a reusable urinary catheter system designed to solve some of the problems associated with the most common single-use intermittent catheters, including the possibility of complicated urinary tract infections (UTIs). There are “no-touch” single-use catheters that reduce the risk of UTIs, but they are more expensive and often not covered by insurance.

CathBuddy set out to develop a reusable urinary catheter with the annual price point of the most common single-use catheter. But “at the same time, we’ve also been thinking about ‘where do we go from [there]?” Paul said. “Are there opportunities we have as a company that our competitors might not, just because our model is fundamentally different?’”

One idea involved using the catheterization process, which is already somewhat invasive, to collect data to aid in the detection of UTIs.  Paul had met Poliks through various FuzeHub events, and the two began talking about how to incorporate flexible electronics into the CathBuddy device.

“It was pretty wide open in terms of what we were thinking internally, and so Mark and his team got involved at the very earliest stages of what the concept could be,” Paul said.

FlexMed worked closely with CathBuddy to put together a grant application for the Department of Defense Spinal Cord Injury Research Program. The proposal was a combination of FlexMed’s in-depth expertise regarding how flexible electronics could be packaged into a catheter and CathBuddy’s understanding of the clinical aspects of UTIs and catheterization.

“It was a pretty natural collaboration in that sense,” Paul said. “The support from FlexMed ranged from really high level ‘here is the approach you might take to narrow down the list of options’ to much more detailed tactical collaboration about ‘now that we have specific parameters, here is how we would build out that experiment and that scope of work to actually develop this.’ ”

If successful, CathBuddy would receive a two-year grant to work with Binghamton University in developing a smart catheter that could be used as a research tool to advance the clinical understanding of urinary tract infections and may even be commercially utilized to help clinicians manage their patients’ urological health.